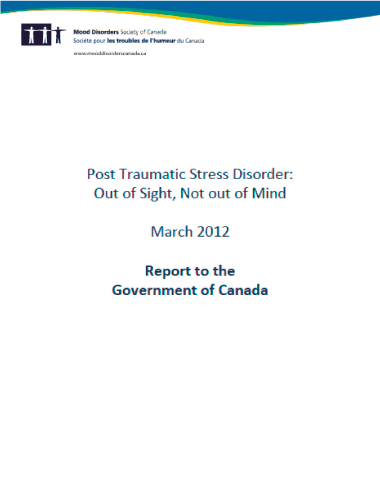 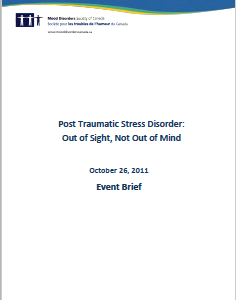 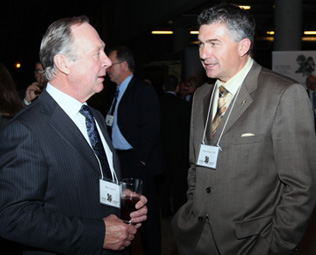 PTSD Report to Government of Canada

The Mood Disorders Society of Canada (MDSC) issued a comprehensive new Report to the Government of Canada on Post Traumatic Stress Disorder (PTSD), which calls for a new national strategy to overhaul the way the disorder is handled in the Canadian healthcare system.

Entitled Out of Sight, Not Out of Mind, the Report aims to improve access to expert diagnostic and treatment care for PTSD sufferers and their families, while eroding the social stigma that surrounds the disorder.

In part, the report recommends:

On October 26, 2011, Mood Disorders Society of Canada hosted a roundtable on Post Traumatic Stress Disorder (PTSD) at the Canadian War Museum in Ottawa entitled “Out of Sight, Not Out of Mind”

The event was attended by over 75 thought leaders to discuss the serious, and often misunderstood illness of PTSD and the how to reduce the social stigma that surrounds it:

Themes for the roundtable discussions included:

[Below] MP Chris Alexander speaks with Dave Gallson of Mood Disorders Society of Canada, and Michael Leo and Marcel Chenard from Lundbeck Canada.

[Below] The Hon. Steven Blaney, Minister of Veterans Affairs, and MP Chris Alexander, alongside participants in “Post Traumatic Stress Disorder: Out of Sight, Not Out of Mind.”

[Below] The Hon. Steven Blaney, Minister of Veterans Affairs, Dr. Kellie Leitch, M.P., Chris Alexander, M.P., and event Emcee Tom Clark, alongside participants at “Post Traumatic Stress Disorder: Out of Sight, Not Out of Mind.”

[Below] Dr. Zul Merali (President/CEO of the University of Ottawa Institute of Mental Health Research) speaks with Mrs. Leslie Natynczyk (Honorary Patron, Military Families Fund and wife of the Chief of the Defence Staff).