Elephant in the Room Campaign

Stigma can seem invisible, but its effects are not. 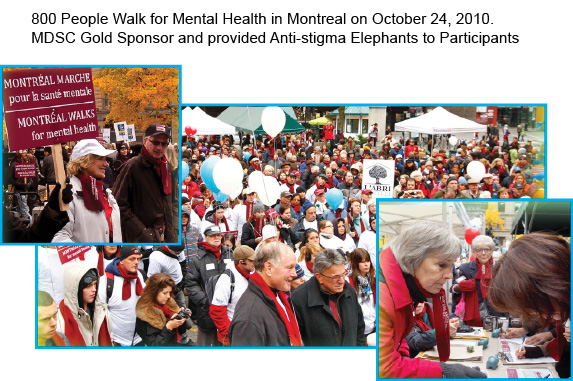 Stigma and discrimination remain the number one concern for consumers and families because they live with its effects everyday. The MDSC has been advocating to change the negative attitudes, beliefs and behaviours.

Mood Disorders, Stigmatization and Family Caregiving. Mood Disorders Society of Canada.December 31, 2012. An interview with MDSC that aired December 31 at 11am EST with host Dr. Gordon Atherley on the “Family Caregivers Unite” Show on VoiceAmerica Variety Channel. (Link to recording)

The Hurting Profession: Lawyers in Crisis.Article in the Canadian Law Association Apr-May edition of the “National” magazine about lawyers becoming stressed sick and succumbing to depression, addictions and burnout. Article (PDF)

PTSD Report to Government “Out of Sight, Not Out of Mind,” MDSC. March 3, 2012. MDSC issued a comprehensive new Report to the Government of Canada on Post Traumatic Stress Disorder (PTSD) and the how to reduce the social stigma that surrounds it. Report | News Release | Background | More details

Coming Out: Edmontonians Living with Depression. CBC Radio Edmonton. August 19-26, 2011. Several notable people in the community talk briefly and openly about their challenges and successes in living with depression. It is part of a series of shows on depression including “The Costs of Depression” and “The Stigma”. These shows can be accessed and listened to through this link.

Interview Part 1: Stigma-The Unhealthiest Word in Mental Health. Patrick Connors, Newz4u.net, November 2010. Interview with Dave Gallson of MDSC regarding Stigma and what the general public can do… (PDF English, or Weblink)

Interview Part 2: No Need to be the Elephant in the Room. Patrick Connors, Newz4u.net, December 2010. Interview with Dave Gallson of MDSC regarding mental health in the workplace… (Weblink)

Workshop on Ending Stigma and Discrimination, and Achieving Parity in Mental Health: A Physician Perspective.The Canadian Medical Association, the Canadian Psychiatric Association, the College of Family Physicians of Canada, and the Canadian Paediatric Society (Dec 2010). The report documents an invitational workshop to build shared understanding among physicians about the sources of stigma in the health care system, and recommend action to end stigma and discrimination and achieve parity in mental health. Read more…

Stigma research and anti-stigma programs:  From the point of view of people who live with stigma and discrimination everyday. MDSC. March 2009. This paper examines the contributions and limits of stigma research. It reviews and comments on the findings from the Mood Disorders Society of Canada’s Stigma Research Workshop in October 2006 and presents further MDSC thoughts and activities.  It then documents national and international anti-stigma activities since that time and offers a series of recommendations for forward movement.  It asks the question:  What progress have we made?  Read more… (PDF English)

Stigma and discrimination – as expressed by mental health professionals. MDSC. November 2007. Anecdotal reports of consumer and family experiences of stigma and discrimination are numerous. At the Mood Disorders Society of Canada’s (MDSC) October, 2006 Stigma Research Workshop (supported by the Institute of Neurosciences, Mental Health and Addiction (INMHA), the Public Health Agency of Canada, and Health Canada) the focus was on identifying top research priorities. Read more…  (PDF English)

Stigma and Discrimination Research Workshop Proceedings Report, MDSC. October 2006. As part of the mandate to support those with mental illness and offer leadership in strategies to address mental illness, the Mood Disorders Society of Canada convened a national workshop to explore the issues around stigma and discrimination.  Read more…  (PDF English)