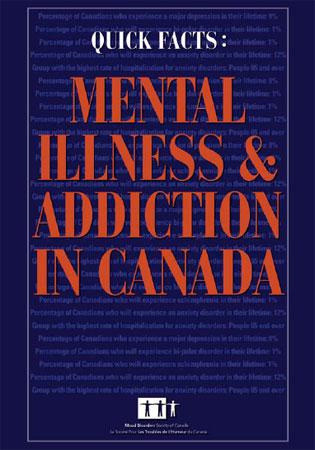 Quick Facts on Mental Illness and Addictions in Canada, 3rd Edition, Nov 2009, is an expanded version of the hugely popular second edition. It brings together, in a comprehensive, evidence-based document, important statistics relating not only to mental illnesses and addictions as they impact individuals and their families but also as they impact the healthcare system, the workplace, and the economy in general. It also provides an understanding of the relationship between mental illnesses, addictions, and physical illnesses such as cancer, diabetes, and heart disease.  Read more… (PDF English – French)

Quick Facts, Nov 2009. This plain text version of the 3rd edition of Quick Facts contains all citations for the facts in the published edition, as described above.  For researchers, students – or for those who wish to access the resources for themselves and learn more about mental illness and addictions.  Read more… (PDF English).